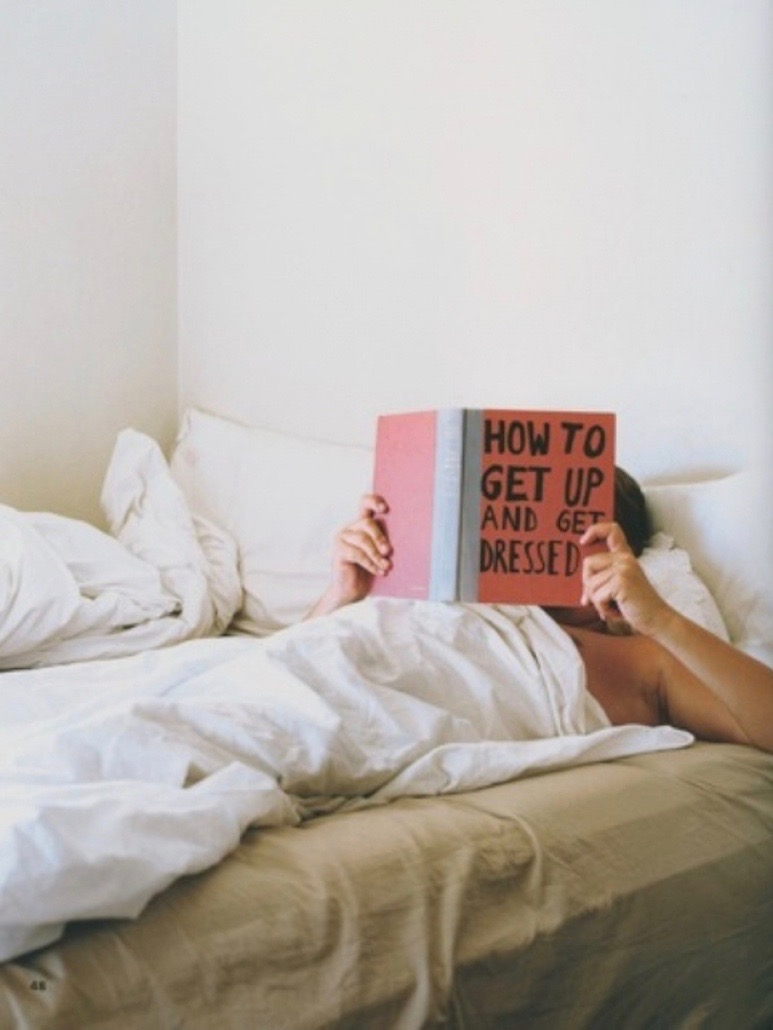 Step 1: Believe in yourself

First of all, remember that you’ve done this before. You may be glued to your mattress now, dressed in nothing but your ex-boyfriend’s smelly T-shirt and a duvet you wish passed as an outfit. But rest assured: You will eventually rise and shine and become the best version of yourself, that is a fully dressed human with brushed teeth. The universe is conspiring with you on this!

Make a list of five things you want to accomplish today. Set small goals, like “getting up“, “choosing an outfit“, “not going back to bed“. Over-ambitious to-do-lists have proven inefficient as nobody ever manages to finish everything, which is frustrating and leads to acts of defiance, like watching Netflix at 7 am in the morning. You don’t want to be that Netflix-in-the-morning-watching person. Also learn to delegate. Do you really have to make your breakfast yourself? Can’t your roommate do that? After you’ve written a not-too-ambitious to-do-list, make a second list of adjectives that describe your current mood. Now compare your lists. The list comparison has no real purpose, it’s just meant to help you stay in bed a little longer while already feeling productive.

Step 3: Be mindful (but don’t overdo it, please)

Don’t try to resist the urge to grab your phone and open Instagram the moment you wake up. People say you shouldn’t do that because it’s counterproductive to mindfully starting the day, but frankly, people who preach that only do so to feel less shitty about themselves. Apart from that, mindfulness is probably not only overrated, but even harmful to the planet, like many other big health trends of the past years. Did you know that it takes a thousand liters of water to produce two and half avocados? Now think about the number of baths you’ve taken in the name of mindfulness in the past year. Apart from that, Instagram is full of fully dressed, risen and shining people showing off the best version of themselves. Don’t miss out on this chance to get #inspired.

Meditate for ten minutes. It’s okay if you fall asleep during meditation. Simply take this as a great excuse to get an extra ten minutes of sleep until the snooze alarm sets off again. Although you don’t even need an excuse for that. After all, sleep is the new yoga. You’re basically working out right now.

Still in bed? There’s so many ways to be productive while horizontal. For example, you can put together an outfit in your head. Doing this now will save you time later when you’ll stand naked in front of your closet freezing your ass off. Start by picking an item of clothing you absolutely want to wear today. Then add matching items around it. If you don’t have anything to go with the item you absolutely want to wear, that’s probably because you don’t have anything to wear – a very common problem. Now would be a good moment to grab your phone again and search the internet for dream clothes nobody can afford. Create a “wish list“ on some luxury online shop and send it to everyone you know.

You should feel centered, grounded and ready to get out of bed by now, but if you don’t, that’s okay – we’re not here to judge your feelings. Remember: You’ve done this before. Like, yesterday! Apropos: You probably still have the clothes you wore yesterday lying around, right? Right. Why not wear them again? People at work only think about themselves anyway, so they won’t notice. Having solved that problem, there’s only one hurdle left to tackle: how to get out of bed. But that’s the easy part. Simply empty the big bottle of water you forehandedly placed on your bedside table the day before. After about fifteen minutes, you should feel a strong urge to run to the bathroom. Use these 15 minutes to connect with the universe (and also, to get some more sleep).

Have a great day!